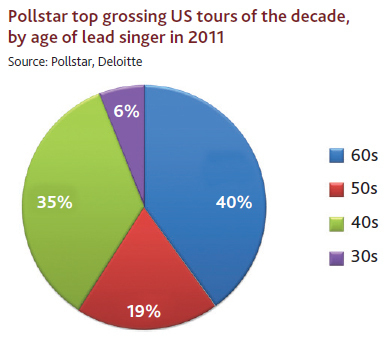 In a recent study, Pollstar charted the top grossing US tours for 2011. As you can see in the chart above, older acts are earning the majority of the touring revenue. Digital Music News brought up an interesting question about the future of the music industry: what will the touring industry look like in the near- and long-term?

Rock bands with deep-pocketed fanbases continue to rake in the big touring money—acts like Bon Jovi, U2, and others never fail to fill the seats. Even if the dynamics of the concert industry always favor older acts with long-standing followings and more disposable income, will the younger generation be able to fill in the gaps in a decade or two when they become the legacy artists? The question then becomes whether the Generation Y audience is a more fickle bunch. We are used to downloading songs off the Internet, putting it on our iPods, and having access to an unlimited amount of music. We’re often exposed to so much but give back so little (in monetary terms, that is).

What might result is a more fragmented system of music and allegiances to artists that won’t last for decades to come. Paul Resnikoff wrote:

“Instead, younger acts are probably making their biggest impact at festivals, a huge growth category that could represent a massive shift in future concert-going (and probably wouldn't be well-represented in this study).”

Younger audiences have the endurance to go to concerts for full-day shows with dozens of acts. The thirst for endless choice in music directly at our fingertips is translating to the concert experience as well—Lollapalooza, Coachella, Electric Zoo Festival, and many other annual events are staples of the younger generation of music listeners.

For the concert industry as a whole, the sum of all its parts might make up for any future shortcomings in legacy acts that bring in large sums of money on an individual basis. Hopefully, younger artists will still be able to make touring work without losing steam as they mature into Generation Y’s future legacy touring acts.