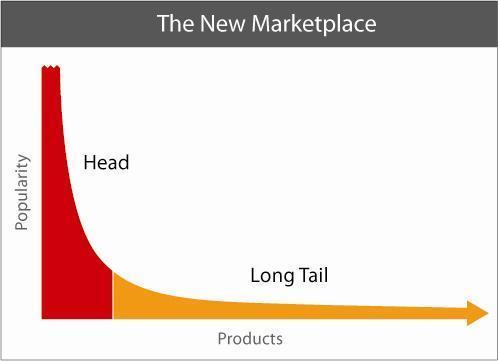 The world of technology and music are both witnessing their own stories of fragmentation but are merging into one long tail. In some instances this will mean more (but smaller) winners and in some instances it might mean very few winners at all. Chris Anderson coined the term the “long tail” as a means of “describing the retailing strategy of selling a large number of unique items with relatively small quantities sold of each – usually in addition to selling fewer popular items in large quantities.”

The long tail is applicable both in music and technology. For example, in the world of online business, more and more startup companies are getting funded as it has become easier to start companies (Amazon EC3 cloud services for scalable web development, open-sourced programming software, etc.). Eventually there will be too many companies and not enough follow-on investment or talent to help take these startups to the next level. As a whole, however, these companies manage to create software that enables consumers like you to discover, listen to, buy, and download music in a much easier fashion than in the pre-Internet days.

What does this mean? A lot more music by a lot more people with fewer and fewer high-selling records or singles. In a recent post, Digital Music News asked Apple how much artists should expect to receive from streams off of Apple’s music streaming service iCloud. While Apple mentioned that iTunes receives a 30% cut of sales and declined to comment on streaming rates, Digital Music News says artists can expect royalties in the range of $0.0007 to $0.0035 per stream. One can assume that regardless of volume, even bigger names will have trouble making as much money through streaming as they did on album sales before the digital era of music downloading.

This long tail of music downloads paints a grim picture for artists looking to scratch by.  At the very least, royalties grew 9.1% in 2010 to a total of $1.6 billion globally (via SoundExchange figures). With streaming services like Spotify breaking into the U.S. and leveraging Facebook’s massive userbase and Pandora finding more distribution channels for their music services, we can expect streaming music to keep gaining steam. However, more streaming won’t mean much more in terms of financial return for artists. The winners will be those who ride the coattails of the digital music revolution by gaining exposure and finding new ways to monetize their content. The music industry has always been a story of few winners, but now it’s going to become a fragmented story where we’ll have to piece together the spoils amongst a larger number of players and smaller bits of data.