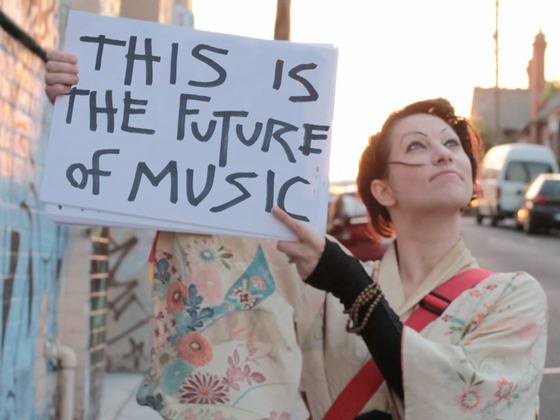 Amanda Palmer, part member of musical duo Dresden Dolls and part solo artist and social media extraordinaire, raised a whopping $1,192,793 on Kickstarter from 24,883 backers who supported her project with contributions of $1 all the way up to $10,000 (with rewards appropriate for the amount given). Palmer set her funding goal at a more modest $100,000, but a tidal wave of support from her cult fanbase and the very word-of-mouth online community helped her smash all notions of what a music project could raise from crowdsourced fundraising and what a record deal means in the modern music industry. To top it all off, the money is going to fund the project, so the lion’s share won’t even end up in anyone’s pockets, just invested into getting rewards to backers.

After parting ways with her former record label Roadrunner Records, and calling herself a “major label refugee,” Palmer decided to take the conventional idea of a record deal into her own hands. Palmer proved that if you have the right idea and enough of an online presence, you can essentially ask your fans to be your record deal (not your label). I often talk about how up-and-coming musicians should forget about record deals before they even lay as much as a digital footprint. It’s a chicken-and-egg problem. You want the record deal to help you get promotion and build a big following, but you can’t get the record deal unless you have a big following. And if you do get a record deal, well.. you can just read this long piece about how you won’t make any money anyway.

If you have the DIY mentality, you don’t need to raise $1 million on Kickstarter, but it’s very possible to raise $5,000 to get things started. Many companies have been bootstrapped off of the gracious lending of family and friends—now you have online platforms like Kickstarter, IndieGogo, and PledgeMusic to give you that same nudge with the added benefit of an online community to get you over the top.

What made Palmer’s Kickstarter campaign work? Other than her prior fame, Palmer set up the campaign for success. This wasn’t JUST a record release or JUST a tour—she was selling an experience. Everything from music to signed memorabilia to concerts to custom painted turntables to house parties to paintings of you on a canvas. This is intimacy, art, and entertainment at its best. This isn’t an impersonal stadium tour, you’re meant to feel part of something. This is a lesson for all musicians out there: people want to be included. Up-and-coming artists without a fanbase might not have as much to offer, but that doesn’t mean you can’t bend over backwards for the fans you do have.

As Amanda Palmer so aptly put it, “This is the future of music.”