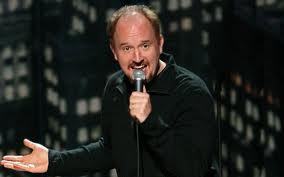 Louis C.K. decided to sell his latest live DVD, Live At The Beacon Theatre, as a DRM-free DVD download on his website for only $5. What are his intentions? What will be the result of this foray into online distribution? The reasoning for this he explains below:

To those who might wish to “torrent” this video: look, I don’t really get the whole “torrent” thing. I don’t know enough about it to judge either way. But I’d just like you to consider this: I made this video extremely easy to use against well-informed advice. I was told that it would be easier to torrent the way I made it, but I chose to do it this way anyway, because I want it to be easy for people to watch and enjoy this video in any way they want without “corporate” restrictions.
Please bear in mind that I am not a company or a corporation. I’m just some guy. I paid for the production and posting of this video with my own money. I would like to be able to post more material to the fans in this way, which makes it cheaper for the buyer and more pleasant for me. So, please help me keep this being a good idea. I can’t stop you from torrenting; all I can do is politely ask you to pay your five little dollars, enjoy the video, and let other people find it in the same way.

So how bold was Louis C.K.’s move? After a post on TechCrunch, a commenter named Sean Hammons replied, “The publicity he’s getting is worth this decision alone. I didn't know he had a new special coming out anytime soon, but because all the nerds love how he's doing it, I am aware and he has my $5!” The self-deprecating comedian also made it to the top of Reddit with the news and gained publicity all over the Internet with his appeal to the good graces of the masses.

Radiohead attempted a similar gesture back in 2007 with their album Rainbows, where they used a pay-what-you-want-to pricing scheme. For their subsequent album The King Of Limbs, the band decided to go back to a regular flat pricing model. Radiohead’s idea for music downloading was an attempt at getting goodwill and a reasonable return. Will Louis C.K.’s decision succeed with this same philosophy? Definitely. All the publicity Louis C.K. gets for his album is free marketing. If you take away the need to pay for this kind of marketing, then you significantly increase your margin (even if you’re charging much less to buy the DVD than you would otherwise). Also factor in the benefit of not having to cut in others on the profits.

Now fans, or prospective fans, don’t have to think to themselves whether paying $19.99 for a live DVD of Louis C.K.’s comedy is worth it. Now they can pay the equivalent of an expensive cup of coffee, and even if they don’t enjoy the DVD or think it’s “worth it” in the conventional sense, they can think to themselves that they did a good thing by buying into Louis C.K.’s business model. It’s win-win for Louis C.K. and the consumer.