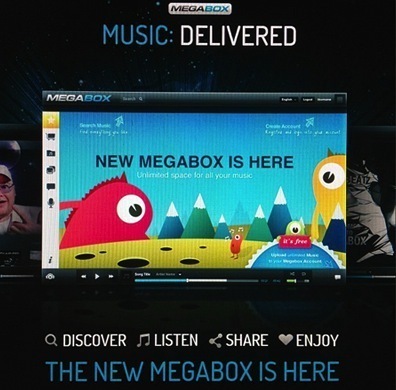 Despite being arrested for criminal copyright infringement, Kim Dotcom has been resilient in his efforts to bring his new service MegaBox to the masses after the shutdown of Megaupload and Megavideo in January 2012. Kim Dotcom tweeted to his followers:

“The major Record Labels thought Megabox is dead. Artists rejoice. It is coming and it will unchain you.”

What is MegaBox and what is its answer to the current woes of the music industry? Dotcom described the almost too-good-to-be-true business model:

"We have a solution called the MegaKey that will allow artists to earn income from users who download music for free. Yes that's right, we will pay artists even for free downloads. The MegaKey business model has been tested with over a million users and it works."

Dotcom expects to not only pay artists 90 percent of all download earnings, but also to compensate artists for free downloads. It’s too early to tell how much artists will actually make and which major label artists will support the new service. Despite having artists

like Kanye West, will.i.am, Jamie Foxx, Sean “Diddy” Combs, Alicia Keys, and Chris Brown defending Kim’s business in their “Megaupload Song,” without major label backing the future MegaBox service might not get the traction it seeks. It does however have beta users like 7digital, Gracenote, Rovi, and Amazon MP3. So even if it doesn’t have Universal Music Group (UMG) on board, it has some goodwill from other important names.

According to Digital Music News, there are already rumors that artists are making money off of MegaBox:

“…we’ve heard that some major rappers were already making money off of MegaKey, and rumors also point to development efforts by incoming CEO Swizz Beatz. Which sort of corresponds to what Busta Rhymes was angirly tweeting a few days ago. ‘1st of all I am sooooo proud of my brother @THEREALSWIZZZ 4 being apart of creating something (MEGAUPLOAD) that could create the most powerful way 4 artists 2 get 90% off of every dollar despite the music being downloaded 4 free…’”

Regardless of its future success, and whether it will even see the light of day amidst ongoing litigation, Dotcom is showing the feds and the music industry that he doesn’t take a fight sitting down. He clearly has a chip on his shoulder, wants to challenge the status quo, and is willing to do so by jeopardizing his freedom—whether it’s on a quest for revenge or the Almighty Dollar.