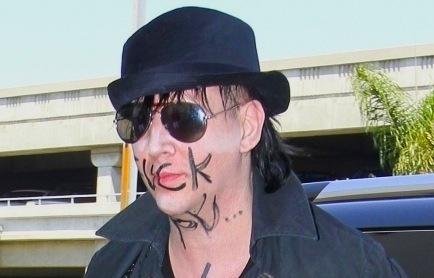 Not one to stray from the provocative, Marilyn Manson showed up at Los Angeles International Airport (LAX) with profanity written across his face in the hopes he’d prevent paparazzi from selling his photograph to the highest bidder. A witness of the encounter, who goes by the name j_patrick_12, wrote:

"I just went through the LAX security line with Marilyn Manson. He had 'F---' scrawled in large letters across the bottom half of his face, with what appeared to be a grease pencil. As we each removed our boots in the security line, he kindly explained that it was not directed at me or anyone else in the airport, but rather at the paparazzi, so that they couldn't sell any photos of him that they took. He was really apologetic about it, and covered his mouth around young children while apologizing to their parents for exposing their child to profanity."

While many celebrities try to seem anti-establishment by doing something controversial, Marilyn Manson puts thought behind what he does—perhaps a lesson many should take in celebrity. Some celebrities will take the spotlight when they can get it, some will shun their celebrity despite fighting so hard to get it, and others, like Marilyn Manson, just do whatever they want. Manson doesn’t go for shock for the sake of shock. His name came up in the media after the recent The Dark Knight Rises shooting—parallels to Columbine were all too apparent. Manson’s open letter to the public after being blamed for Columbine by the media shows the artist’s true colors:

“When it comes down to who’s to blame for the high school murders in Littleton, Colorado, throw a rock and you’ll hit someone who’s guilty. We’re the people who sit back and tolerate children owning guns, and we’re the ones who tune in and watch the up-to-the-minute details of what they do with them. I think it’s terrible when anyone dies, especially if it’s someone you know and love. But what is more offensive is that when these tragedies happen, most people don’t really care any more than they would the season finale of Friends or The Real World. I was dumbfounded as I watched the media snake right in, not missing a teardrop, interviewing the parents of dead children, televising the funerals. Then came the witch hunt. Man’s greatest fear is chaos. It is unthinkable that these kids did not have a simple black-and-white reason for their actions. And so a scapegoat was needed.”

There are celebrities, musicians, and artists of all sorts who look for controversy. They live off of it. Marilyn Manson, on the other hand, is equal parts business savvy, thoughtful artist, and outspoken in appearance and words. Perhaps that combination makes for fame, intrigue, and relevance. Or perhaps the man behind the makeup, Brian Warner, is smart enough to appear all those things when and if he wants.