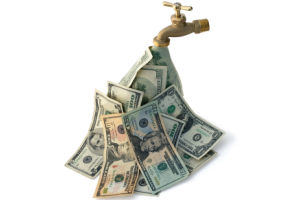 I recently wrote a news blurb on HypedSound about the 25 highest paid artists from May 2011 through May 2012. Dr. Dre topped the list with $110 million in gross revenue, before accounting for taxes, fees, overhead, and related expenses. That’s a lot of money for someone who hasn’t released in album in over a decade!

Dr. Dre’s been meaning to release his album Detox for some time, but probably got sidetracked with selling a 51% stake in his massively popular company Beats By Dre for $300 million. You know, those headphones with the letter ‘B’ on it that you can’t help see all over the subways in New York City (and probably in your suburban high schools too, I just wouldn’t know about that those).

So what does this all mean? It means hip-hop moguls like Dr. Dre and Jay-Z are more business moguls than anything else. They leveraged their music fame to create branded businesses centered around their larger-than-life personas. This might not be something the average indie musician can do, but they certainly can take a couple lessons.

When it comes down to it, don’t sell your music—at least not at first. The reason Facebook, Instagram, and many other social networks didn’t focus on making money at the beginning was because they knew they had to get the eyeballs before they could get advertisers interested. The same is true in music. If people don’t want to listen to your music for free, at first, do you really think they’ll pay for it? It’s hard enough getting attention with the word ‘free’ let alone getting someone to open up their wallet for someone they don’t know about.

I’m not saying artists shouldn’t sell music, but their should be a strategy behind selling. If you give music away for free and increase your fanbase to the point you sell more merch or concert tickets, then perhaps you’ll make more money than if you sold your music straight out of the gate.

EDM and dubstep phenom Skrillex released an advergame, SKRILLEX QUEST, that is promoting his single for ‘Summit’ by having players experience the song rather than merely listen to it. While creating an advergame (advertisement + game) is probably out of the budget or skillset of an up-and-coming artist, that doesn’t mean they can’t a) come up with something interactive to boost record sales, or b) come up with something interactive to boost awareness about you as an artist that will turn into revenue later.

What we’ve seen with advergames, Kickstarter campaigns, Google Hangouts, and other promotional tools is that it’s no longer just about the music. It’s about an experience. Invest in your experience.