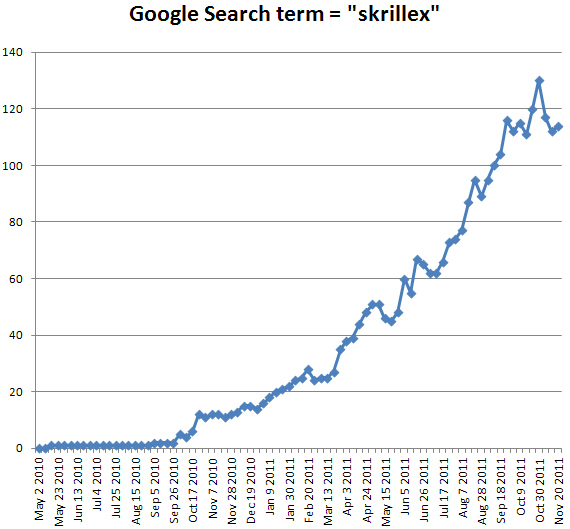 When an artist gets their 15 minutes of fame through American Idol, a controversial news report of some sort, or comes out with their one hit wonder single, you can expect a healthy surge in search traffic for that artist on Google. Not Skrillex. As Digital Music News cleverly pointed out, the dubstep artist has slowly risen in popularity in terms of his Google search growth (this is based off of the search keyword “skrillex” and Google’s trend algorithms).

While some of the search growth can be attributed to American dubstep’s rapid rise in popularity in the last year or two, it is also a good sign that Skrillex is not just a flash in the pan sensation. There is no one-off press mania around Skrillex and there is no sharp spike that indicates a particular new story breaking and gaining some extra search juice before tapering off.

This healthy and steady growth is promising and hopefully will continue for the  artist, who started his career early in an emo rock band called From First to Last under his street name Sonny Moore.

So what does this mean for up-and-coming artists who haven’t yet made their name? Well it means you can hope for the pipe dream of quick success and get a lot of mainstream coverage right off the bat, or you can grind away and slowly build street cred over time. Even Skrillex had a boost because of his connections from producing music under his name Sonny Moore and playing in a popular rock band before that. That’s years and years before he reached the success he has now.

Up-and-coming artists probably shouldn’t hover over their computers tracking search traffic of themselves on a daily basis, but it might be the time to start slowly building your fanbase and online presence (thanking each fan individually for their attention). One day all those small little gains will add up to a career or better. Every overnight success, as they say, is 10 years in the making.