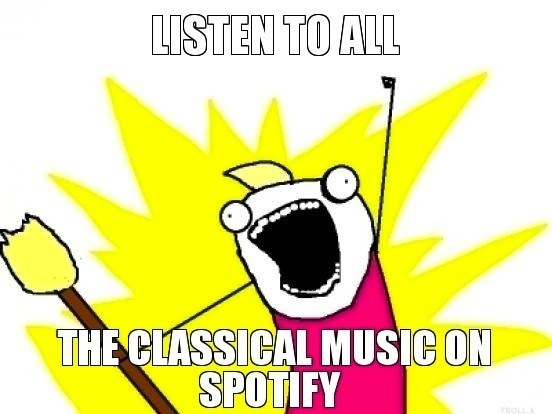 The popular technology and startup blog TechCrunch posted an article today that claimed “Plays Can Increase iTunes Sales. Here’s Proof!” The beginning of the article reads as follows:

“Despite fears that streaming access cannibalizes sales, classical music record label X5 tells me when it launched an app within Spotify and saw streams of one album increase 412% in a month, that album’s iTunes sales shot up 50%. The Swedish label’s “The 50 Greatest Pieces of Classical Music” soon reached #1 on the iTunes Classical charts, and broke into the iTunes Top 200 album charts for the first time, hitting #152.”

This example is clearly just one of many potential case studies, both pro- and anti-Spotify. Paul McCartney and The Black Keys both publically pulled their music from Spotify and other streaming services due to lackluster results from their point of view. In the comments of the article, many TechCrunch readers were quick to note that classical music is a very different kind of genre than the rest on Spotify and caters to a different kind of listener. So while Spotify might be great as a discovery tool of classical and other forms of music, people who already know a genre or artist in-and-out might be more reluctant to buy albums off of iTunes if they know they can stream it off of Spotify for a fraction of the price (or for free).

Another tech blog AllThingsD, had a realistic (although a bit more sobering) outlook on the Spotify effect compared to TechCrunch:

“Some people who weren’t buying any music at all start shelling out a monthly fee for subscription services, turning pirates into profit centers. That still won’t be enough to replace the dollars the industry has lost since its pre-Napster party days. But it is much, much better than nothing.”

Clearly the pre-Napster days are a dream far gone, but artists want to know whether Spotify helps or hurts their bottom line (compared to the current status quo). Spotify CEO Daniel Ek obviously has been open about defending Spotify and their business model, which he says does not cannibalize music sales. Regardless of the cause of album sale decline, Ek told Evolver.fm in February:

“You're talking 10 million active users, 2.5 million subscribers - most of them paying $120 a year, which is double the amount of your average iTunes user. Do you really want to hold back your album from people who are finally paying for music again?”

To be fair, most aren’t paying for Spotify’s premium service, but their absolute user number is increasing by millions as the months go on and their integration with Facebook’s Open Graph deepens. The question now becomes which audience is more affected by Spotify: an audience willing to go out and buy albums but is currently not doing so because of streaming services or an audience that is now paying a monthly subscription cost when they would otherwise being paying nothing or close to nothing for music. What do you think’s more likely?