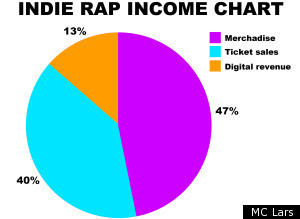 “This was not a fucking golden age. Artists did not swim in money in the traditional music industry… This concept that the music industry was so fucking great is just wrong! It was great for like, one band!”

And the Price is right (pun intended)! In the past, the industry relied on the hits, while artists who couldn’t come up with a successful first or second album were quickly forgotten. As Price notes, these days artists can fail on one album and go straight into making their next album because the price of recording and releasing music to the world has dropped immensely.

Without gatekeepers, it’s anyone’s game. Now you don’t need to ask anyone’s permission, you can just make your art. Whether your art will later be accepted and will help you launch a career is another question, but you don’t need a label’s check to tell you if you can or cannot at least attempt to have a career.

Hypebot does a good job of showing how MC Lars gave away his music for free so he could jumpstart his merchandise and ticket sales. As you can see in the chart above, 87% of his music income arose from merch and tickets (not CD sales). And instead of getting a label to fund the recording process, he used Kickstarter to help raise the money. MC Lars commented on the changes in the music industry:

“Being a musician no longer means simply being a songwriter and performer. One must also know a little about business, branding, t-shirt design, social networking, production, publicity, accounting and tour managing."

The music industry is now one of long-tail economics. There might be smaller riches in it for the anointed few, but there are certainly many more who have a shot at a piece of the pie.