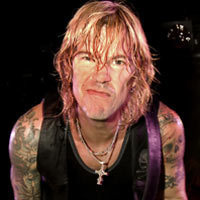 Duff McKagan tells you how to say no to drugs. At one point in time, drug use in the rock n’ roll scene was not only expected, it was a given. McKagan, of Guns N’ Roses fame, writes for Seattle Weekly:

“Rock and roll definitely has the stereotype of being connected to drug use. I get it. The cliché has been earned. But in our modern era, it seems like drugs have finally lost the status of being a mystical and romantic part of the rock persona. Maybe we've seen too many people implode, with public meltdowns, and worst of all, death.”

This mentality goes back to the days of wild nights in L.A. and NYC. McKagan notes:

It’s funny to come across this article at around the same time I watched a documentary on the old days of New York city in a VH1 documentary called “NY77: The Coolest Year in Hell.” The infamous Summer of Sam was also a time when NYC hit rock bottom, going through bouts of crime, unemployment problems, a city-wide blackout, and the beginnings of the disco craze, hip-hop birth, and punk rock underbelly.

It’s easy to look back on an era in a favorable light, despite its problems, romanticizing the excesses and the newness that is now nostalgia. Rockstars from records labels and punk bands like The Ramones and Blondie reminisce about the early days of CBGBs and how 42nd street was crawling with drugs and hookers. As one put it, the days when it wasn’t safe in Times Square for women and children, those were actually the best days for the arts.

In the same way that modern day New York City might be bland for a punk band from the late 1970s, drugs are often seen as the alluring and commonplace part of the artist’s lifestyle. Clearly McKagan doesn’t think it’s necessary even though many of his fans offer him joints at shows as if its second nature, thinking that it’s a given that a rockstar would partake in drugs handed to him (or her). Steve Jobs, co-founder of Apple, was open about his experimentation with LSD, so even in other fields than rock n’ roll a drug can be described as providing a spiritual or creative awakening. However, all the coke, heroin, or pot in the world won’t help you write the next “Sweet Child o’ Mine” or “Welcome to the Jungle.”