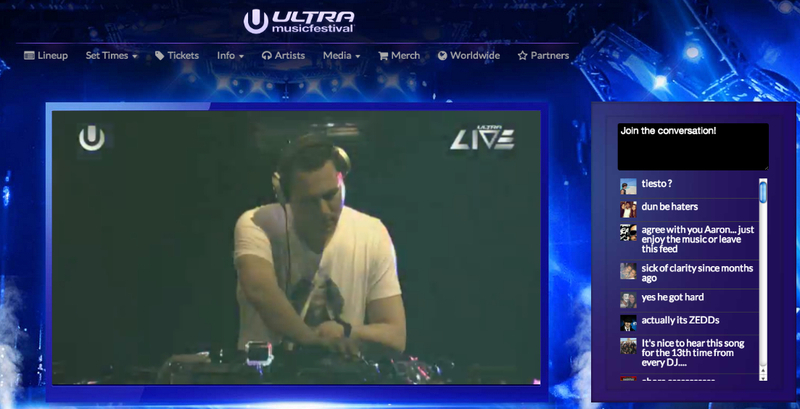 By the time I finish writing this and you read it, it’ll be too late to catch Sunday evening’s streaming of Ultra Music Festival live from Miami. Don’t worry, there is always Weekend 2 of the festival. The live stream is being hosted on YouTube and showcases many of the bigger names of the festival with many different cameras catching all the angles from the DJs to the audience up close and from above.

Nothing can replace the live concert experience, but not everyone can be in Miami and shell out a few hundred bucks for a weekend of EDM and partying. Because of this, the YouTube live concert series has gained popularity over the last couple of years. But it’s not just about the music, it’s about the video and feeling like you’re part of something. Ultra Music Festival was smart enough to put a chatbox on the right-side of their concert stream on their website so you could talk about set times, what song a DJ is playing at any given moment, or just make fun of the crowd for not showing enough energy. You weren’t there sharing the experience with audience, but you were sharing the experience with others in a completely different way.

While some concert promoters might not like the idea of live streaming a show because they’re going to make money off ticket sales more than you getting a free look into the concert from home, it’s hard to believe that online streaming will cause ticket sales to go down. If people can see what they’re missing, they’ll make sure to get out to the next concert when an artist or festival is in their area.

From a mental standpoint, it would be interesting to find out whether live streaming a concert from home makes you feel like you’re part of the event or an outside peeking in on something you’re missing out on. Even though you might be missing out on the true physical experience of a concert, at least you don’t need to earplugs to save your hearing for 20 years down the road (unless you have a really powerful sound system at home of course and understanding neighbors).