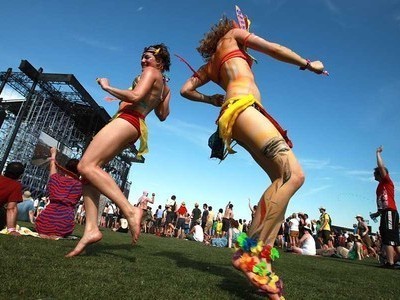 Funny or Die wrote a hilarious, and quite accurate, article entitled 7 Types of People at Coachella. From Hopeless Drug Addicts to Bro’s to Industry Assholes, you’ll find a variety of folks at an increasingly mainstream music festival like Coachella. You’ll see similar types at other festivals. At Electric Zoo Festival you’ll see more of the Kids on Ecstasy but you’ll get fewer of the Dirty Hippies and People With Babies. Every festival has it’s own signature groups, and as festivals invite a greater variety of artists, you’ll get more distinguishable sects of festival-goers that tend to pop up out of the woodwork and make themselves known. At some point, you reach a tipping point where a music culture no longer belongs to one type of music fan (and most certainly doesn’t comprise solely of Music Lovers, the last remaining of the “7 Types”).

So what is the shelf-life of cool? When do the early adopters give up on a scene that’s no longer their own? I already see cries on the Internet about how EDM (Electronic Dance Music) is not the same. Bro’s in their yellow wifebeaters and scantily-clad young women in tutus are the norm now. Perhaps drug culture is now the mainstream, as more reports of Ecstasy use are alluded to (even by Madonna), and a scene becomes more focused on its excesses than its music. That doesn’t necessarily mean the music is any better or worse, it just means some fans don’t feel the same connection to the movement as they did before.

When a genre of music is not known typically as “mainstream” but then quickly rises in popularity, you’ll get a greater diversity of fans and concert attendees. At Coachella, a festival that invites all kinds of music from electronica to rock to hip-hop, the disparity in the crowd is widens every year. This can be interesting for some and off-putting for those who feel like they enjoyed the music before everyone else and don’t want to taint their scene with non-Music Lovers. Growing pains!

It’s an amusement park where some are there for the rides, some are there for the games, and some are just there. When a theme park  has too many themes, some people might not even know where to begin (or whether at some point, they should ever be there at all). This is in no way a knock on diversity. But when things are no longer about the music, how long do they stay cool?